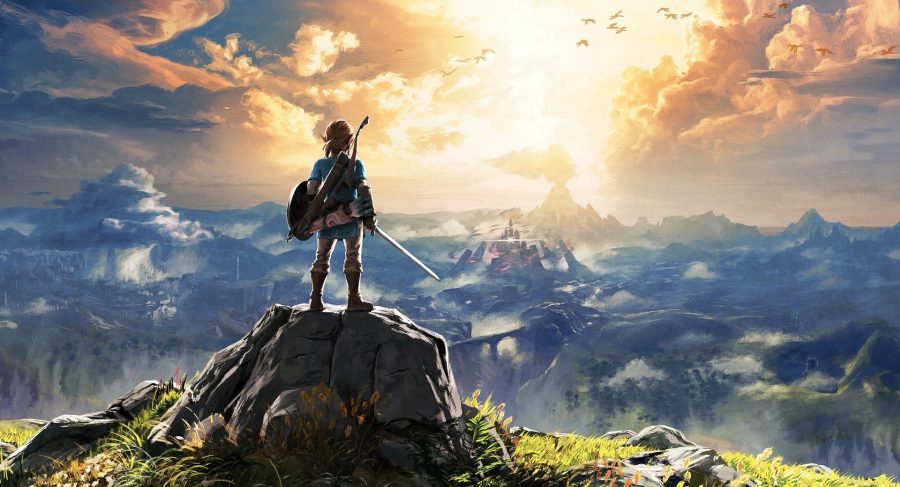 “How does this game exist?”

This is the question I asked myself after a gameplay sequence within the first few hours of The Legend of Zelda: Breath of the Wild. It began as I made my way towards a shrine atop a snowy mountain in the game’s starting region. The grassy plains gave way to white bitterness as I traversed the mountainside. Having successfully cleared the previous two shrines I felt nothing could stop me.

Then Link started to shiver. I shrugged it off: “I can dash my way to the shrine and scuffle inside before the cold bites me, it’ll be fine.” I made it about halfway before Link died from hypothermia.

Clearly I would need to make preparations if I intended to survive my trek. I ran off to adventure further in pursuit of a way to conquer the cold, soon coming across the nearby hut of an old man. Inside was a diary entry recounting a recipe, noting that if someone could concoct it for him he’d be willing to part with his warm doublet. I set out to gather ingredients, using my intuition to figure out where to find each, then returned and cooked up his meal. In return he gave me the cold-resistant clothing and I was able to successfully reach the shrine.

At no point did the game’s hand force me down a given path, instead letting me go off and die, learning through my misadventures. I could have missed the hut entirely and needed to find an alternative route to the shrine, and even when I did find the hut I needed to figure out where to collect the ingredients myself, and in order to make the food I had to teach myself how to cook. It’s a design philosophy that harkens back to Zelda’s early days, something Nintendo has largely left by the wayside in the name of accessibility with each consecutive release.

Yes, Breath of the Wild is not entirely accessible to a non-gaming audience from the outset. You’ll end up in situations that can and will kill you but it’s that danger that’s so enticing. In many ways this is the franchise coming full circle, returning to the original’s harsh environment that proved pivotal for so many people at the time.

Beating a game is easy if you hold the player’s hand. It may mean a broader range of people can tackle its challenges, sure, but in turn you risk the game becoming a process of going through predetermined motions. What made the original Zelda and its contemporaries stick out was that they left the player to their own devices to conquer them. It was your experiences, not that of a game designer playing the role of tour guide through a carefully constructed digital world that would crumble like a house of cards if you peeked behind the curtain. This isn’t to say that these classic games aren’t carefully constructed digital worlds as well but they lead the player through visual language rather than by force and give them the freedom to learn from failure.

This tradition is carried over into Breath of the Wild which has the most meticulously crafted world for its expansive size that I’ve seen in a single-player game. Everything is plotted out with such painstaking intention that it comes across as organic despite its handmade nature. It instills a feeling that anything is possible even if every approach you could take was preempted by the designers. Want to set fire to the grass around your enemies? Go for it. How about push a boulder onto them from the cliff above? Yep, totally viable. And if you want to charge in headfirst for some hand-to-hand combat? That works too. And they’re all equally satisfying options because the combat scenarios were designed with them in mind.

This careful construction is lost on many modern open-world games where the crutch of procedural generation has become touted as a feature. Look no further than last year’s No Man’s Sky, a game that promised endless worlds and delivered… the catch being that every one of those worlds was vapid and empty. Algorithms are only as variable as their formula will allow and no algorithm can make up for deliberate game design. What people want isn’t true randomness but a world that has been crafted to feel naturalistic.

Any elements of randomness in Breath of the Wild exist to augment already present game design. Let’s look at the dynamic weather system for example: rain makes cliffs too slippery to climb and lightning forces you to unequip all metal objects from Link or else die by way of electrocution. Meanwhile your own electric-based items will pack an extra punch while fire-based ones lose their utility. Beyond this, NPCs will react to the rain by sheltering themselves.

These NPCs play a critical role in Breath of the Wild. Every single inhabitant has been given a name, personality and (for the most part) unique model down to the guards who do nothing more than stand at the entrance of towns. They each have daily routines and many can recount personal stories stretching back to before the calamity 100 years prior (the races of Hyrule have long lifespans, it seems). Through these people the world is given occupation and history, evidenced through the minor characters in particular. They may not impact the gameplay or main storyline in any capacity but their existence sells the idea that Hyrule is home to individuals . They make the world worth fighting for, turning this mass of land into something more: a home.

The way one traverses the world is also an important element to selling the fantasy of adventure. This is why the paraglider and climbing are the key component that tie all of Breath of the Wild together. With these you can go anywhere you can see, at least once you learn how to best make use of them. Like many other elements of the game your options are opened up to you as you master its systems. Figuring out how to work around your stamina meter that prevents you from climbing or gliding indefinitely makes the ability to reach new places all the more satisfying. You yourself have grown as an adventurer through your own trials and tribulations as one would in real life.

I can’t remember the last time a game so fully delivered on every one of its promises like Breath of the Wild continues to do for me. I’ve likely pushed past 30 hours of playtime and the sense of discovery only becomes heightened further as I continue exploring. It’s fully realized the vision that The Legend of Zelda has always strived for and for that reason it’s the most Zelda game ever made, and likely the best too. Where the franchise can go from here is unclear but for now we’ve reached the pinnacle.

10 thoughts on “How Breath of the Wild crafts an adventurer”