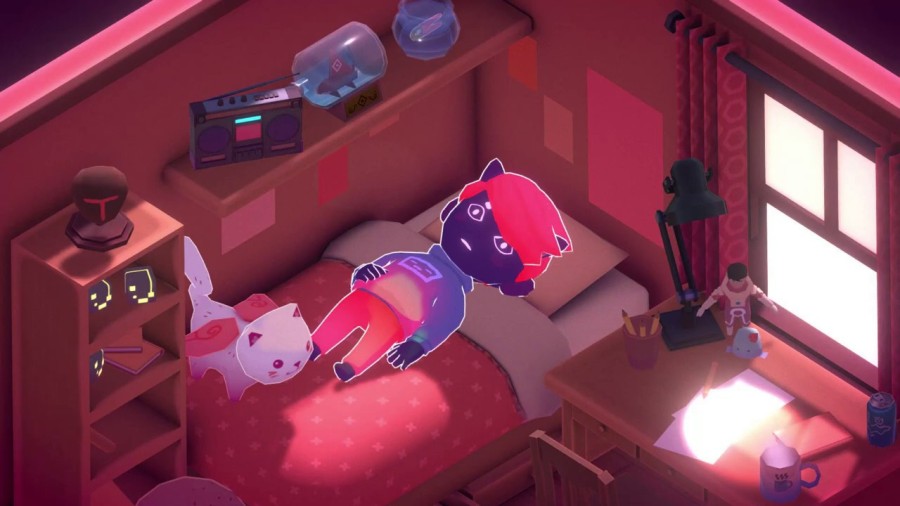 This is a cross-post from my game design blog. You can find the original article here, as well as more like it.

The COVID-19 quarantine is perhaps the most universally felt event of our lifetimes. Everyone is feeling the impact of being shacked away with no clear idea of when life will return to any sense of normalcy. But as noble and necessary a task this is in the name of public health, it also goes against the innate social nature of humans. Everyone is disconnected from the people and routines they’ve always been accustomed to. Inevitably, loneliness arises and for some who struggle with their mental health, their burden is amplified.

I fall into that latter category and being holed up by myself in a NYC studio apartment has done my multiple ailments no favors. Further, for the first weeks of the quarantine I didn’t have access to my therapist, divorcing me of the medical help I’m used to. Thus I found somewhere else to turn. Somewhere where I could find camaraderie in my struggle without the stakes of alienating myself from people I know. Popcannibal’s Kind Words proved to be exactly that platform.

While it’s available on platforms like Steam, to call Kind Words a game is to mis-sell its functionality. This is more an anonymous social network with a narrow goal of users sending out requests for help and responding to the requests of others. It’s a truly anonymous, too: you’re only identified by the first letter of your name and sharing further personal information/identifiers is highly discouraged (and potential grounds for a ban). In other words, the stakes are as low as possible which opens you up to share whatever you’re feeling without any fear of social repercussion.

Writing requests gives you seven lines to express what’s weighing on your brain. There are no specific guidelines to abide by. If times are tough or depression is kicking in, help and/or solidarity is to be found here; this makes up the majority of requests. But I’ve also seen people ask for music recommendations, share a positive thing that’s happened to them, and so on. Ultimately, the important part is that whatever you have to say, you will be heard. I’ve never had to wait more than 5–10 minutes to receive a response, and at that have generally received multiple. It’s a powerful remedy to know that people took the time to read your call and respond in kind, even if you can’t always relate to the answers given. One of the worst parts of loneliness and depression is feeling like nobody is even trying to relate to you; here, everyone is making an effort to do just that.

In truth, I see myself as hard to relate to, and much of the time (though definitely not always) I’ve simply appreciated the sentiment of having my plea heard. But what has proved unexpectedly rewarding has been responding to the requests of others. The need to assess my own life experiences to give substantive answers often leads to self-help along the way. For example, in responding to relationship difficulty or breakup woes of which I have no personal stake in, I realize solutions I’ve come to learn can be applied to my own similar circumstances; they’ve just been clouded by cognitive distortions when I’m embroiled in my own headspace. Another case: my experiences struggling with weight help me give advice on how to motivate oneself toward healthy lifestyle changes while also reminding myself to keep to those same principles when I’m slipping. In other words, responding to requests has been the bread and butter of finding practical applications to my own issues through Kind Words.

Smartly, the developers made responses a one-way street. Once a response received by the requester, the only continued form of interaction at their disposal is to send a sticker. And as the responder, you’ll get a notification that you were sent a sticker but not by who. There’s no burden involved in the transaction between users; it’s entirely impersonal. This may seem like it opens the floodgates to toxicity but it fact it encourages the opposite. Trolling requires the satisfaction of knowing you stirred negativity so stripping Kind Words of this feedback loop provides little to incentivize would-be ne’er-do-wells. Reinforcing this is the (small) entry fee and relatively robust report system. The approach is clearly working because after a decent amount of time spent on the platform, I’ve yet to come across one single instance of trolling or harassment. This is a rare fully anonymous safe space.

While Kind Words stands on its own merits, it serves a special need in a time when so many are facing unprecedented isolation. It’s not the answer to all your problems (and not a substitute for professional help) but this haven can assuage the burden of the world and your world, even if just for a moment. The interactions may be fleeting but the cumulative impact it has on your headstate is extremely powerful. It’s certainly played a part in helping me cope through the COVID-19 quarantine.